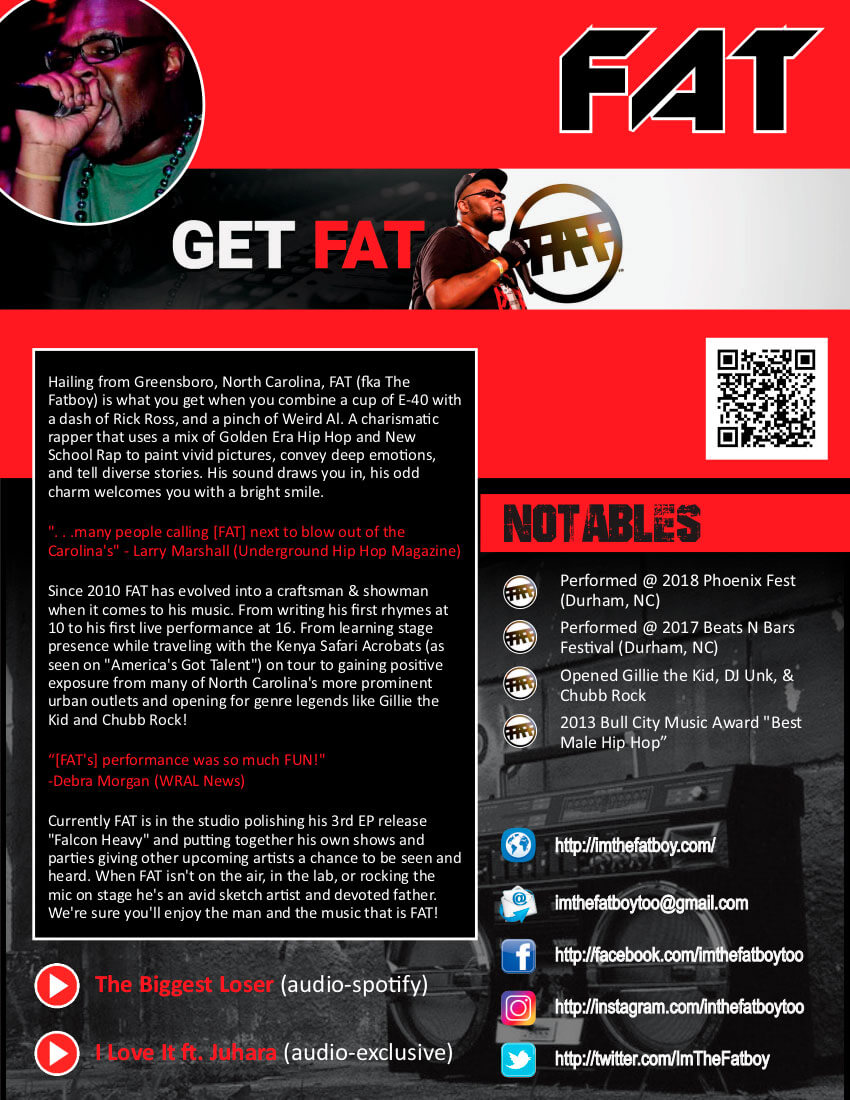 This months Feature is a familiar face to the underground experience we have watched his evolution………..lets check in with FAT
Mistajay: Just a refresher for those are familiar and have checked in with you before for but those who don’t know what is the story and conception behind yoFAT: ImTheFatboy from Greensboro, NC born & raised. North Side. Summit & Cone! My name was an evolution, I went through a lot of them (Midaz Kin, Big T.R.U.T.H, Dirty Razkal just to name a few). Fatboy had been a nickname that some of my cousins would call me, and at the time not many ppl had "fat" in their rap name. But I was afraid that people would use that as an opportunity to clown and I started to shy away from the name. However it then became a Bruce Wayne/Batman moment as I decided to embrace the fear and stigma behind it and use it as fuel to the flame. I out "The" on there to make a bold statement.

Mistajay: You are polishing up your third EP release Falcon Heavy how much growth do you believe that you have ahd since your first effort?

FAT: Falcon Heavy is actually out now on all major streaming platforms (plug). It's a six track EP covering my part of the human experience. For example the song "I Love It" featuring Juhara is a song about two people being in love but being unable to spend physical time because they're chasing their dreams, goals, and bag. The song "Stranger Than Fiction" is about the facade that is the music industry and how the behind the scenes is much more hollow than the outward appearance. So I cover a lot of ground in only 15 minutes worth of music. Just in that description you can see the growth.

Mistajay: This was my question to you then….Where do you see the hip hop going in 2017? How do you see yourself fitting into that….and this was your answer ImTheFatboy: “I feel hip hop is on the other side of the crossroads. It's more artistic than ever before and you can see it across the board. As long as the music is great and top quality there's a fan base for it. It's not just a cool kids club anymore, and a lot more open than it use to be. It's amazing to see so-called "mumble rap" co-exist with conscious, story telling and Grace the same person's playlist. I think that will bode well because I'm already pretty apt at navigating multiple takes on the genre as a whole. I can do a trappy, show song like "The Biggest Loser" and a story song like "Paper Plates" in the same breath and not get the "side-eye" for it. Leaving ample room to combine the two.” How do think things are now do you still think some of this applies and how do you see yourself fitting in now?:

FAT: For the most part I do still think the landscape of the industry is how I described then, maybe even moreso because the line between what's considered "white music" or "black music" or "old music" or "nerd music" is blurring but also becoming more defined. Ppl can digest what they like, generally, as a consumer without getting a screw face for unfamiliar tastes from their peers. At the same time, however, as an artist you have to set your boundaries. You know your image, your brand, and your personality and gaining a following for being and putting out just that (the genuine you) is easier now that it was when I first started rapping.

Mistajay: In 2012 this was your answer to this question….What is your best song recorded to date and why? Fatboy: What a terrible question to ask an artist haha. I don't feel I have a one best song, I have my favorites but still its a list not one song. I like songs that get crowds moving at shows and get my heart racing on stage. Right now the song that sticks out to me is one of the singles from my upcoming EP. It's called "Xtra" and it's just a really hype, uptempo, tough, party track. I love it. Is your answer the same or has it evolved since then?

FAT: I definitely feel the same. I don't have a best song recorded. A lot of times if I finish it and then it winds up getting put on repeat in my car for two weeks then I know I might need to do something with it. Other than that every song has different value for me. Currently I'd say "Gristle" or "Stranger Than Fiction" on my current EP "Falcon Heavy" will be my faves at the moment. Gristle was recorded in two takes at Medley Studios and I knew it was a jam soon as it was finished. Stranger Than Fiction I like for the content matter. It's the tale of how the music industry and, in many cases, the artistry in the music industry are a thin veil for politics, mental health, drug use, and more from the perspective of an artist. As far as has it evolved then yes AND no. No because much like "Xtra" in 2012, "Gristle" is just killer, braggadocios bars on a heavy beat, but also YES it has evolved because the side by side choice for me is a song with a message too.

Mistajay: NC’s the local scene from your area to the rest of the State how would you describe it and it’s growth from 2011-til now?

FAT: I live in the Triad area of NC now which is a move from 2011/2012 when I lived in Durham. I'd say RDU has always been a cut above the rest business-wise. I learned a lot about PRO's , copyrights, marketing, licensing, improving on my image, branding, and performance while there. I've notice other areas beginning to catch up with that, but still a little behind. As far as the Triad tho, the comradery is unmatched. Durham and the rest of the state seem to make networking a little more difficult and exclusionary. There's a lot of cliquishness and gatekeeping amongst all the unbridled talent. Where I live now it's almost like if you've met this person face to face even once you can hit them up and collab on something.

FAT: It was important but it's BORING and I'm still learning. As an artist, I'm a creative so the business stuff and paperwork bore me to tears, but I understand that a lot of making an earning from music is registration and tracking. And not just registering with ASCAP or BMI, but also copyright, media base, soundexchange, soundscan, BDS etc. that can help keep track of where your music is being digested. AND then there's publishing which is such a huge cog in the machine to collecting royalties that I've decided to start my own music publishing company that I hope to one day gear towards smaller artists with a following who may lack that kind of backing and administration. For now I'm learning how it works on my behalf in order to serve others better in the future.

Mistajay: How has the covid 19 situation affected your plans as related to music?

FAT: COVID-19 was like pulling the rug from under my feet much like everyone else. I'm definitely a performance artist that gets most traction and momentum from being in front of ppl and meeting them face to face. When the momentum ground to a halt I realized my digital presence was severely lacking. I always had a show or a radio interview or something people could watch or look at, but interaction eluded me and still does in many ways. But I started doing little things like Jam Concert Live which is a concert series where I give other artists an opportunity to come thru and perform on Facebook/Instagram live, and Drunk Live Zoom Party where I invite my close Facebook friends from all over to get their alcohol of choice and cut up with me on the zoom app. Both have made a difference but I'm still learning how to widen my reach and engagement.

Mistajay: What are your future plans?.

FAT: My future plans are to go on tour. I'm looking into both a 5 city United States Tour as well as a three/four-city tour in the Asian country of Myanmar but both are just at the opening of the planning phase. Doing research, plotting courses, and working out the necessary budget. I've just started doing big & tall modeling and I love it so I'll definitely continue with that, and I've been working on a series of animated shorts starring myself as well. However, I think my biggest goal is to get my publishing company together and rolling. Music has always been a passion of mine as is helping other artists to be inspired, motivated, and progressive and that's a great way to be involved with both while also potentially turning a profit. But I know there's a lot to all of it, so stay tuned but also be patient lol

NEXT MONTHS FEATURE Xception !!
Mistajay is doing a monthly interview feature the underground experience on the blog www.empiremusiq.com/blog and would like to interview you for this new post please contact nccceo2@yahoo.com to publicize any new projects that you have coming up thanks for your time. Donate or pay a $50 dollar interview fee below!!