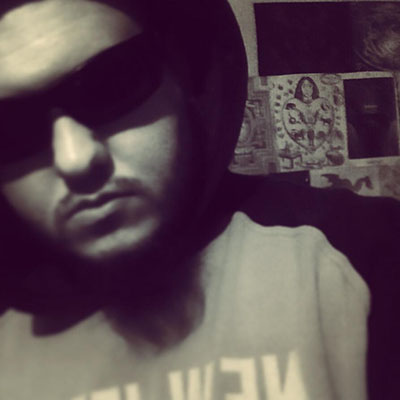 This month’s feature is a Eastern European Emcee/Producer with his own flare out to
pave his own lane let check out…….X-Flame

Mistajay: What is the story and conception behind your producer name?

X-Flame: here's the story, when I was 14 I met the other local rappers in my city

so after proving myself by making a old school hip-hop beat on the spot with what was laying around in the studio a organ keyboard and a old computer using only the program "Goldwave" and playing all the keys and bass-lines and looping them up front of everybody leaving them all very impressed by the level of my skills and talent at that age. So I was asked to join the group and get on the group track I had to choose a new before we hit the studio I thought about it for few days and I always were attracted to the sound of the letter X and it being a Symbol of mystery and representing the unknown in mathematics so I knew I wanted to be called X but I needed and I always had a attraction towards the fire element I use to medicate outside in darkness front of a candle and write poetry and rhymes so I decided to do more research on the fire element and I found out that the first religion was fire worship and fire was the element that gave power to humans to out-power animals in the jungle it also gave us knowledge and it's been used as a symbol of knowledge ever since like "the Eternal Flame" so X-Flame has many meanings considering X is the Cross/christ/multiplication also Unknown Knowledge cause that's something I've always included in my music aside from the street element and at the time the name also meant to mean unknown fire like cause I was that Unknown flame of fire on the local rap scene that came out of no where

Mistajay: What area are you reppin? What is the hip hop scene like there?..

X-Flame: I started out Reppin 96 cause I was born and raised in Aleppo, Syria but being a Syrian-Croatian and moving to croatia at 18 and living there for the last decade got me reppin Croatian Hip-Hop as well not just the Syrian Hip-Hop and Arabic Hip-Hop Scene

well, the scene in Syria when I first started was just in It's beginning I'm one of the pioneers I built a lot of the foundation I'm actually THEE hidden hand of the so called Godfather of Syrian Hip-Hop and that's history that a lot of people don't anyone to discover because they don't want to credit me for playing that role. The Syrian scene became more advanced over the years and also the arabic hiphop scene but sadly there's no major labels no big indie labels just underground rappers with no guidance dissing each other mostly just for fame and to be heard by a ignorant audience that lacks the knowledge of hip-hop culture 90% of arabic hiphop artists in the middle east don't know how to make money off their music and aren't getting paid off their music that is a fact on the other hand the Croatian east European scene is very different it has more commercialism and mainstream ties with the media few artists make a little bit of money nothing major though and the underground rappers either make DARK HARDCORE hip-hop or that New School TRAP that's influenced by American drill and trap

as far as rap I was def influenced by 90's Westcoast Gangsta rap and old school Eastcoast boombap (NWA, Cypress Hill, Onyx, Naughty by Nature) then later on dived deep into the underground.. and I'm also influenced by other genres of music blues, jazz, opera, doom metal, score music..etc I've taught myself to draw inspiration from literally anything that I can reach and tap in mentally, spiritually or visually.

Mistajay: How do you describe your style of production?

X-Flame: Multiversal.. versatile.. musically multidimensional. I can produce the darkest eerie hip-hop tracks ever then turn around and flip something smooth you can lay back and get smoke to I'm a master of many styles, musically my creativity is unlimited.

Mistajay: What is your best song recorded to date and why?.....

X-Flame: me as a Rapper? many fans say "Dopest Alive (Morphine Dreams)" cause it is a very unique song where i used the strongest drugs in the world as metaphors to describe how dope i am as a MC combining that with occult knowledge and breaking personal info down through raps..other fans say my verse on "Darkness (feat. Mabous48) cause of the performance and the spiritual depth and dark imagery that's in the lyrics but I can say there is no best because i try to give my best on every track but there's always special songs like "Heartburn" off "The Return of X" Mixtape that track is def intense it's charged with pure energy I wrote that in 30 mins and recorded it in one take no adlibs and the lyrics are insanely deep you can really FEEL every word I'm saying cause it was my soul speaking. it has to be my best performance yeah, personally I think track is my best track overall "Heartburn".

Mistajay: If you could work with any other 3 artists or bands who are still around and touring, who would they be and why?

X-Flame: If I could.. as a Rapper? Twisted Insane, Cage, Brotha Lynch Hung cause they can go to the extreme lyrically with the taboo evil demonic type of content other rappers wouldn't dare to go darkside like that with me on the track. As a producer X-Raided, Shyne, Killa Sin because they got a lot of real pain and aggression to put behind the bars they spit and knowing what they are capable of lyrically I can meet them on the level with my production

X-Flame: It is literally the most important thing in 2020 because if you're not able to fund your music career forget about it, it is a business, it takes money to make money, you must investment in your business. and know how to invest properly to earn money off streams and eat off brands

Mistajay: Where do you see the hip hop going in 2020? How do you see yourself fitting into that?

pure Entertainment and that is the Devil's Game meaning God left the building. it ain't a fair game no more. Ironically GOOBA by 6ix9ine proved that to be successful in 2020 all you gotta do is troll and play games in the streets. It's all about making money to the artists and companies involved in the music business it ain't about whats real and what's truthful anymore, it ain't about the craft and lyricism, it's about whats entertaining to this generation it's all games, and how do I fit in all of this mess? I don't fit. and that's is not new to me. I can do all that bullshit everybody is doing but I ain't everybody I had to reinvent myself in my image and what’s real to me and adapt to what i can adapt to.. So I survive the next decade and stay original

cause I didn't start rapping for entertainment and to play games or copy others and follow trends.

I will be making the proper business moves based on the experience I gained over the last 12 years but lyrically and musically I'm taking my music to the next level on my own terms. I'm not going to play ball with none these muthafuckas

Mistajay: How has covid 19 situation affected your plans as related to music?

X-Flame: It slowed everything down basically.. also gave me time to reflect on the changes I must make to thrive in this grimy world.

Mistajay: What are your future plans?.

X-Flame: Playing my cards in a unexpected way from me. Investing into my indie business in new methods, making new music without the standards and limitations that the industry created.

X-Flame: yeah go to https://x-flame.bandcamp.com and buy my music or look me up on spotify, itunes and all that.. follow me on IG Twitter FB and get in touch with the real underground.

NEXT MONTHS FEATURE Fat!!
Mistajay is doing a monthly interview feature the underground experience on the blog www.empiremusiq.com/blog and would like to interview you for this new post please contact nccceo2@yahoo.com to publicize any new projects that you have coming up thanks for your time. Donate or pay a $50 dollar interview fee below!!