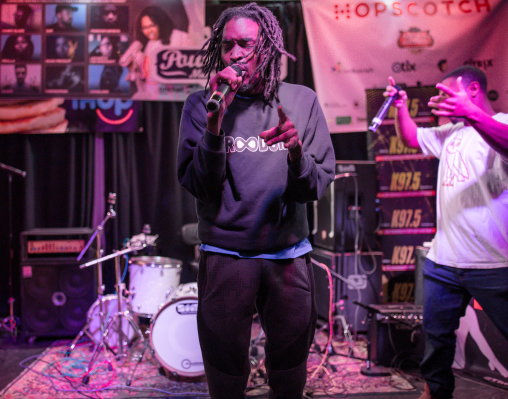 It has been almost 4yrs since we checked in on you so for people who didn’t see the last post what is the story and conception behind your emcee name?

A: Well I Play By Own Rules and That's Forever... So Freedom is Infinite.. I don't limit myself at all.

What area are you reppin? What is the hip hop scene like there?

A: I represent the 919, The Johnston County Region Of It, But I Set My Base In Raleigh, NC. The Hip-Hop Scene Is Kinda Divided, You have your traditional Hip-Hop and Then You Have Your Alternative Hip-Hop.. I'm trying to serve as a Segway to both sides of the game because I love both styles but I myself can only do so much.. But the shows are packed, The music is good and the Artists are very talented. Choice 92.1 FM plays Indy NC Artist Music and Gives them Interviews as well as WKNC 88.1, WXDU 88.7 and K97.5.

You say you where Inspired By Lupe Fiasco’s “Food and Liquor” album what are your influences of your music now? Have they changed? And what inspires you now?

Lupe Still Influences Me A Lot, But I Have Been On that Curren$y, Freddie Gibbs, Meek Mill, 6lack, Schoolboy Q Wave Lately.

You returned from New Mexico, The Selma, North Carolina Emcee known as Freedom Infinite has been on the move from putting together events in Raleigh, NC such as The Infinite Family Takeovers what did you learn being away from nc and how did the events come together?

I learned how to be more Independent and Not To Be Afraid To Try New Things in Life, When I came back home we started dong our own events and having success with them with a different show format than others.. The Infinite Family wanted to do their own events so we found a venue we were all accustomed to and started doing them.

You linked up with North Carolina Super Producer Clientel Rockzwell to develop a new sound in Hip-Hop which resultejd in the an executive produced album by Rockzwell Entitled "Nerdz In The Hood."  On you last project we interviewed you about, you talked about emphasizing of skill over image with the LP “Operation Chokehold” What do you feel is your growth for that project to this one?

Nerdz In The Hood Is More Based On Showing People You Can Make Good Music on a Different Sound... Operation Chokehold was more about the skills over image, but this is more about the whole package.. skills, image, etc. The growth from OC to Nerdz was me starting to stop rapping for rappers and start making music for the people will buy my music, come to shows, cop merch etc...

The "Nerdz In The Hood." Project has has so much success that's the songs have been played in radio stations in NC such as Choice 92.1 FM, WKNC 88.1, WXDU 88.7 how do explain the success as well and how you contacted the stations to get airplay.

Clientel Rockzwell as your producer, deejay and mentor how did the two of you connect to create this new project?
Where do you see the hip hop going in 2017? How do you see yourself fitting into
that?

What are your future plans?
I'm going to continue to expand my brand as an artist and as an entrepreneur, dabble in new/different sounds, wrapping a few projects up and push myself and my team to higher places.

With all the new music and sounds coming out, we must understand it's a new generation of hip hop. But we must also do our best to preserve the culture that raised us. Stay true to yourself and be original in anything you do. It may be times when you feel discouraged but you must never give up and continue to fight for what you believe in.

Where can fans follow you and get your music?